Skip to content
Fresh of a new song “Bla Bla”, released on Solardo’s label Sola records, and a track on Cajual records (from Green Velvet), Manuel de la Mare has already scheduled for the next months releases on Flashmob, Kenja, Smiley Fingers, Twisted Fusion and Rawsome. 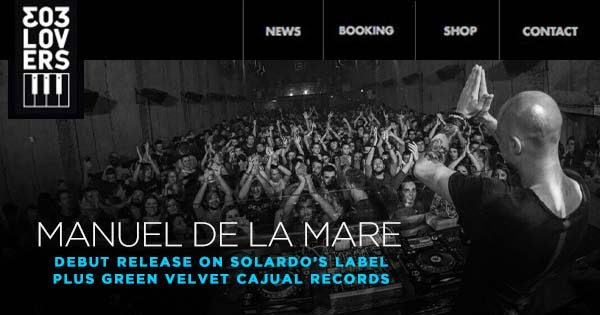 Manuel, together with Luigi Rocca and the 303lovers’ team have just started the celebration with the new Lake Music FSTVL edition, having as guests Hector Couto, Leon, Neverdogs, Simone Liberali, Wade, heavy weights of the most modern tech house scene, and already planning the next events with Raffa FL, Miguel Bastida and more.

Take a dip in to the underground pool that is the next wave of tech house talent, as Solardo team up with fresh-faced heavyweights on Sola Miami Compilation 2018. If there is one thing every playlist needs, it is a dash of acid, and Manuel de la Mare steps up to fulfil this need with epic finesse.

New song from Manuel De La Mare and the Dakar, a brazilian artist at his debut album on Green Velvet’s label Cajual records. Already entered Beatport top100 after a few days from the release date.

Already supported by artists as Chus and Ceballos, Dosem, Leon, Oscar L among the others here Manuel takes a more dark percussive direction with some hypnotic synths in the drop.

The post 303lovers 10th Anniversary With Events and Releases Stronger Than Ever appeared first on Hammarica.